This week we all discovered how much fun could be have with a hoop and lots of bubbly water. The children mixed the bubbles on the path and then used the hoop in the bubble mixture and made enormous bubbles. We had lots of fun blowing them and chasing them round the garden.

Later on the children worked together on a box making it into a home for the dinosaurs, one made a dinosaur egg, others painted the top, one of them made a paddling pool and a tree. Fantastic team work

The children asked to do ‘big’ drawings, they laid their pieces of paper on the floor, chose their pens and pencils and then drew huge pictures using both hands. 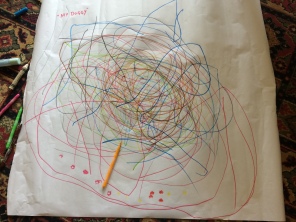 The children also built tall towers using the thin bricks. Again working together to balance the bricks on tops of each other.